Since the 1920s a nautical standard time system has been in operation for ships on the high seas. Nautical time zones are an ideal form of the terrestrial time zone system. Under the system, a time change of one hour is required for each change of longitude by 15°. The 15° gore that is offset from GMT or UT1 (not UTC) by twelve hours is bisected by the nautical date line into two 7.5° gores that differ from GMT by ±12 hours. A nautical date line is implied but not explicitly drawn on time zone maps. It follows the 180th meridian except where it is interrupted by territorial waters adjacent to land, forming gaps: it is a pole-to-pole dashed line.

A ship within the territorial waters of any nation would use that nation’s standard time, but would revert to nautical standard time upon leaving its territorial waters. The captain is permitted to change the ship’s clocks at a time of the captain’s choice following the ship’s entry into another time zone. The captain often chooses midnight. Ships going in shuttle traffic over a time zone border often keeps the same time zone all the time, to avoid confusion about work, meal and shop opening hours. Still the time table for port calls must follow the land time zone.

When a ship is underway at sea it is necessary to man the essential operating stations such as the navigation bridge and engine room 24 hours a day. To accomplish this, the ship’s crew is divided into “watches” which rotate being on duty or “on watch” in shifts usually four hours long.

As early as the 15th Century, a bell was used to sound the time onboard a ship. The bell was rung every half hour of the 4 hour watch. A 24-hour day was divided into six 4 hour watches, except the dog watch (16:00 – 20:00 hours) which could be divided into two 2 hour watches to allow for the taking of the evening meal. 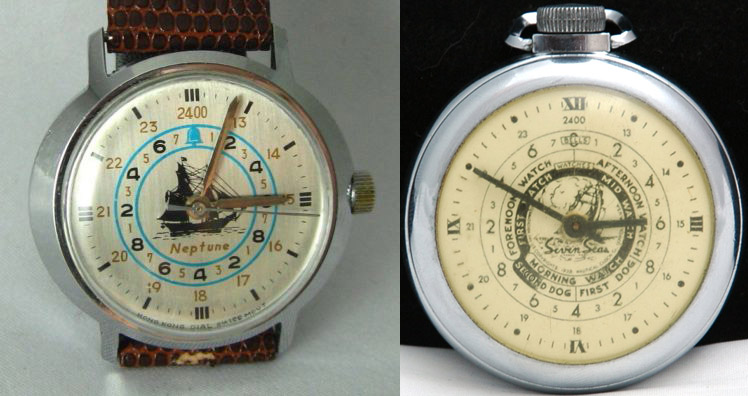 The bells were struck for every half-hour of each watch, with a maximum of eight bells. For instance, during the Middle Watch you would hear the the following:

At eight bells your watch was over! All other 4 hour watches followed this same procedure except the Dog Watches. At the end of the First Dog Watch, only four bells were struck, and the Second Dog Watch bells were struck like this: 6:30 PM, one bell; 7 PM two bells; 7:30 PM, three bells; and at 8 PM, eight bells.

Since 1915, all U.S. Merchant vessels over 100 gross tons have, by law, divided the crew into three watches, working four hours on and eight hours off, and turning the dog watches into one evening watch.

In space, light and time act differently than here on Earth, and speed is a different concept when time can theoretically be stopped in its tracks. The speed of light is 186,000 miles per second, or approximately 670 million miles per hour. Nothing in the universe travels faster than light: at the speed of light, time stops. No matter how fast you are moving when you observe it, the speed of light will always be 186,000 miles per second. In physics, the three dimensions of space and the fourth, separate dimension of time combine to form a single construct throughout the cosmos called space-time. Using space-time, scientists can measure both the place and time something occurs in one.

Time is relative to the person observing it and time may change depending on how fast the observer is moving. Time passes more slowly for satellites in orbit when compared to time on Earth because those satellites are moving. Satellites used for the Global Positioning System are launched with their clocks running faster so that when they reach orbit they mark time the same as Earth-based clocks. Because time passes more slowly in orbit around Earth, astronauts arrive home a little younger than if they had spent the same amount of time on Earth. If you were to travel near the speed of light for what seems to be 20 years, you would return to Earth thousands of years in the future.

A lot of different models is available in official Svalbard & No-Watch tax-free store - SVALBARD.ONE. Visit this store and use exclusive 5% discount coupon code “9UC2MBTU4UV3” on checkout.